One of my favorite memories as a little girl was getting some one on one time with my Daddy.  I was the youngest of four.  When my older siblings went off to school and I was still too young to go myself, my Dad occasionally brought me with him to the donut shop in our small town.  We would find a spot at the counter and sit on swivel stools.  Dad usually ordered an apple fritter and coffee.  I would get my donut and while Dad read the paper, I would spin on my really fun swivel stool.  He would introduce me to his friends as his, “Baby Girl.”  Apple Fritters to this day evoke that memory of Dad taking me out for donuts.  As we try to create special moments with our children today, I wonder what moments will forever hold a special place in their hearts. 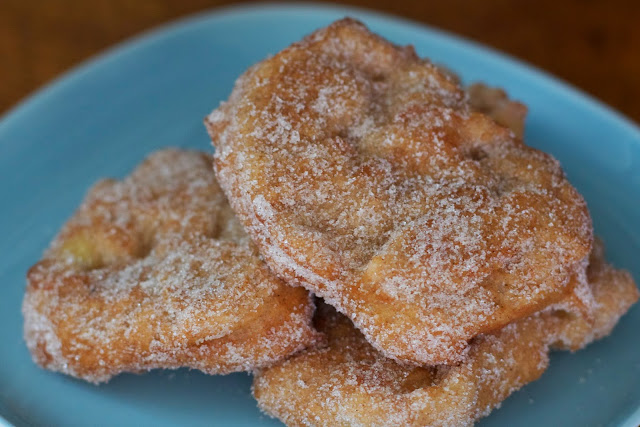 My Mother-in-law often shares one of her special memories of her mother.  Her mom would use left over bread dough to make what they called “flapjacks.”  Not pancakes but somewhere between a donut and a fritter.  They are very similar to the delicious New Orleans Beignets.  She would drop the extra dough in hot oil, fry them, then toss them in cinnamon sugar.

One day when my mother-in-law was visiting, we decided to see if we could make them, using my bread dough recipe (for The Best Gluten Free Vegan Bread).  Since I had some of the dry bread mix already prepared (I like to make several dry mixes ahead of time and store in baggies to make bread making super simple and fast when I need some), it literally took just a few minutes to make.  The expression on her face was sweet and rewarding as I watched her become flooded with memories with a simple taste.  We had done it!  It brought such joy and satisfaction to watch her enjoy each bite, filled with memories, especially because we had pulled it off with gluten free dough!  And I have to say these are AMAZING!  When I put the plate full in front of our kids, Noah took a bit and said, “Mmmmm!  Delightful!  These are great!”  And that is music to any momma’s ears.

I cannot wait to add these as a new family tradition on holiday mornings.  They are so quick and easy, even quicker than muffins.  A real special treat! 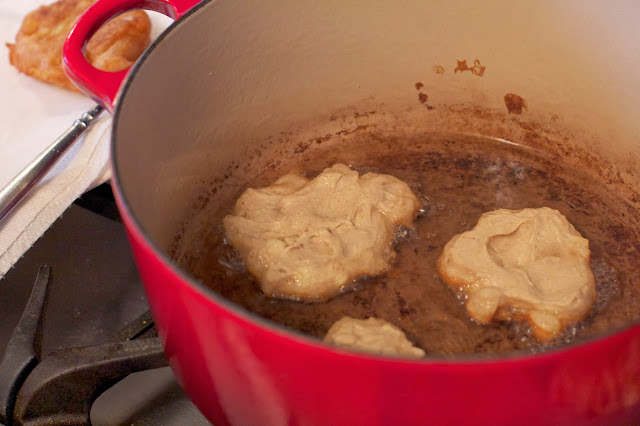 Prepare The Best Gluten Free Vegan Bread dough in mixer with 1 t cinnamon.  Stir in one large (or  two small) apple, chopped into small pieces.  Cover the bottom of your pan with about half an inch of coconut oil (or cottonseed oil).  Heat oil tip when you drop a drop of water in it, it really dances.  Using a two spoons, drop about 1/4 c dough into oil and spread it out as you drop it.  Allow to fry just until the edges start to turn light brown as above, then using a fork, flip them over.  It will only take a few seconds, ok, maybe closer to 15-20 seconds, so don’t walk away or get distracted or they may burn. 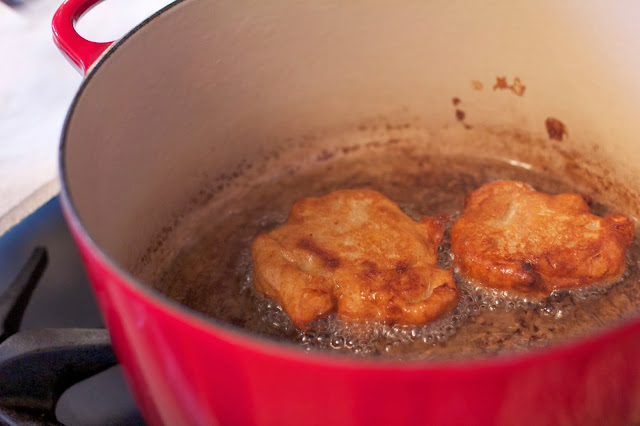 After they flip, allow them to fry for just a few more seconds until the other side is light brown. 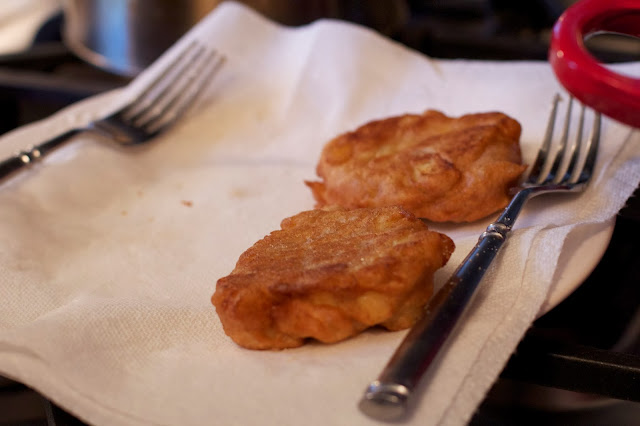 When both sides are lightly brown, remove from oil and place on a plate covered in paper towel so some of the oil can absorb into the towel. 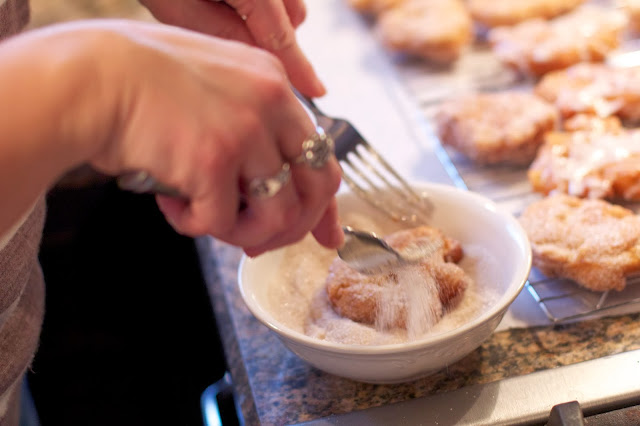 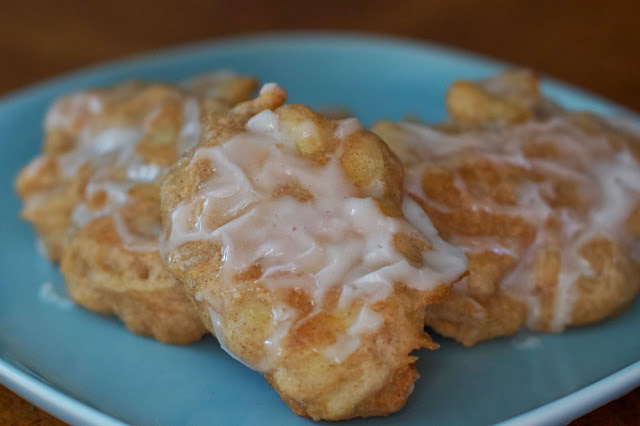 Or if you prefer, place them on a wire rack, with wax paper underneath, to drizzle with glaze and let them rest until you finish frying up the rest of the fritters. 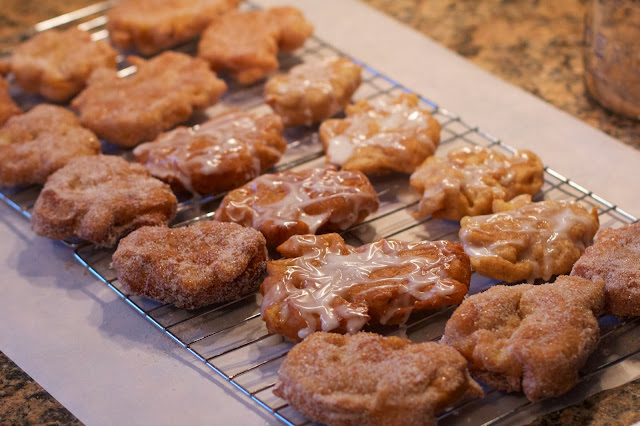 Call everyone to the table and serve them warm.

*Make sure dry ingredients are at room temperature before starting

Cinnamon Sugar mixture:
This can be very flexible depending on how much cinnamon flavor you like.  I usually mix together about one cup of sugar with 1 1/2 t cinnamon.

1. Combine Paula’s GF Flour Mix, xanthan gum, salt, sugar, dry yeast and cinnamon in a medium sized bowl and whisk together. Set aside.
2.  In mixing bowl, combine the coconut oil and warm water together and then add the dry ingredients. Mix on high for 2 minutes, this activates the yeast. It should resemble a thicker cake batter.  Gently stir in chopped apples.  Set dough aside.
3.  Cover a plate with paper towel to transfer cooked fritters onto.  Also, place wire racks on top of wax paper.
4.  In dutch oven, heat oil to cover bottom of pan about half an inch deep.  Heat oil til it is hot enough to make a drop of water really dance and snap.
5.  Using two spoons, spread roughly 1/4 c dough into oil.  Allow to cook until the edges are lightly brown, which will take less than a minute so don’t walk away.  Flip over with a fork and allow to cook on the other side until lightly brown.
6.  Remove from oil and place on paper towel to allow oil to absorb into the paper towel.  Then, toss in cinnamon sugar and place on wire rack (or place on wire rack to drizzle in glaze).
7.  Serve warm and fresh!

If you are wondering what else to use this flour mixture for, check out these other great recipes and related posts…

I have shared this recipe on Slightly Indulgent Tuesdays, Gluten Free Wednesdays and Gluten Free Fridays.