(To read the first part of Our Story click here.)

With the diagnosis of Twin to Twin Transfusion Syndrome (TTTS) at 20 weeks, I was put on bedrest.  My parents drove up from Kansas so my Mom could move in to help us.  My husband so graciously supported me in what I needed, including wanting my Mom by my side.  Thankfully, they have a great relationship.  Mom helped with so many things.  She took care of Noah (2 years old), did laundry, cooked, cleaned, grocery shopped, and even sent Dan off to work with breakfast and lunch (which I’m sure he thought was quite a treat since I don’t do that).

I wondered how on earth I was going to be able to handle laying on the couch all day every day (minus doctor appointments).  As a mom of a toddler boy, I was used to running around all day. Somehow just knowing that it was “my job” to keep my 20 week old girls safe helped me to stay down, even despite the aching bursitis in my hips.  The health and safety of our little girls was completely out of my control but this was the one thing I could do to help them.  Noah, who was always quite independent, quickly became a snuggler and wanted to do his activities near Mom.  It’s amazing how little ones can sense when something is wrong.  We spent a lot of time together by the couch coloring, reading books, doing puzzles, listening to music and watching movies.

Our babies had their own amniotic sacs but shared one placenta.  Their blood vessels in the placenta were connected, transfusing fluids between the two babies, unequally.  Baby “A” was referred to as the recipient twin  because she had too much fluid in her sac, which caused pressure on her heart.  Baby “B” was referred to as the donor twin, she had very little fluid in her sac, thus had difficulty growing.  The earlier you develop TTTS in your pregnancy, the worse your chances of survival or healthy babies.  Getting diagnosed at 20 weeks is considered early and made their odds of survival slim.

After getting diagnosed, I hit the computer hard.  Researching as much as I could about TTTS.  I had heard of it before and seen babies diagnosed late in pregnancy, while I worked as an RN, in a Special Care Nursery.  The mama nurse in me was on a mission to understand TTTS the best I could.   Many family and friends brought meals over including my sweet co-workers who faithfully brought meals twice a week and would often stay to visit.  Their faithfulness, endurance and thoughtfulness showed me the love of my heavenly father in such a tangible way.  Noah was always eager to greet them at the door, with guitar in hand and sing them some of his favorite songs like, “Indescribable” by Chris Tomlin or “Marvelous Light” by Charlie Hall.  I’ll never forget him standing by the door, strumming his guitar that was as big as he was and singing such big words, with no reservations. 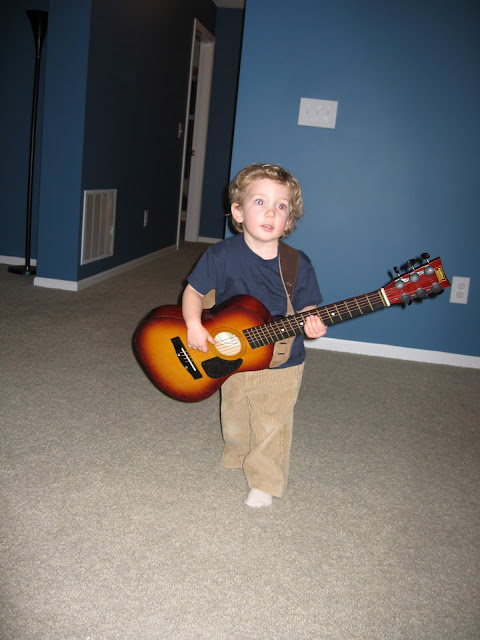 Appointments went from a couple times a week, to daily ultrasounds and then weekly echocardiograms with the pediatric cardiologist to monitor Baby A’s heart.  With each appointment we went in for, we didn’t know if our babies would still be alive.

At 26 weeks, we had our second amnio reduction done.  During an amnio reduction, the doctor goes into the amniotic sac with a long needle to remove the excess fluid.  Removing the fluid is an attempt to control the excess fluid in Baby A’s sac which would hopefully help relieve some of the pressure on her heart.  Baby A was showing tricuspid regurgitation, a beginning sign of heart failure.  Baby B was showing some absent end diastolic flow, where the blood flow through her umbilical cord would basically stop coming to her.   Unfortunately, the fluid removal during the amnio reduction did not help enough.  Our doctor referred us, out of state, to one of four fetal surgeons in the US, to look into a surgical treatment option.